Set in the late 1800’s, this mystery series portray the iconic female sharpshooter as an amateur sleuth, and follows her adventures with the Wild West Show at home and abroad. 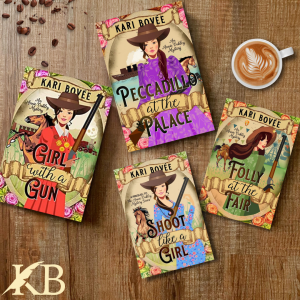 Bovee’s exciting debut, Girl with a Gun, was released in June, 2018 and was a finalist in the Next Generation Indie Book Awards for Historical Fiction Books and the winner of the 2019 Hillerman Southwest Fiction Award. It’s prequel novella, Shoot Like a Girl, followed in September, 2018. The second book in the mystery series, Peccadillo at the Palace, was released in May 2019. Folly at the Fair was released in 2020.

“Absorbing, heartfelt, and thrilling, Girl with a Gun shows off young Annie Oakley’s skills as a sharpshooter and as a loyal detective. From the period details to the Wild West setting, I was completely immersed in the story and in the larger-than-life characters. Like Annie herself, Bovee’s prose sparkles with precision and skill.” – Martha Conway – Author of The Underground River, New York Times Book Review Editor’s Choice.

Fifteen-year-old Annie Oakley is the sole supporter of her widowed mother and two siblings. An expert markswoman and independent spirit, she hunts game to sell to the local mercantile to make ends meet instead of accepting a marriage proposal that could solve all her problems.

After a stunning performance in a shooting contest against the handsome and famous sharpshooter Frank Butler, Annie is offered a position in the renowned Buffalo Bill’s Wild West Show. Finally, she has a chance to save the nearly foreclosed family farm and make her dreams come true. But then her Indian assistant is found dead in her tent, and Annie is dubious when the local coroner claims the death was due to natural causes. When another innocent is murdered, Annie begins to fear the deaths are related to her. And to make matters worse, her prized horse, Buck, a major part of her act, is stolen.

Annie soon discovers that the solution to her problems lies buried in a padlocked Civil War trunk belonging to the show’s manager, Derence LeFleur. And so, with the help of a sassy, blue-blooded reporter, Annie sets out to find her horse, solve the murders, and clear her name.

Girl with a Gun