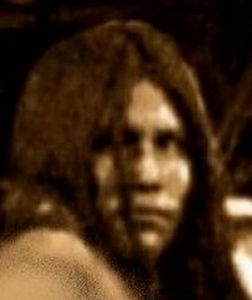 These are just a few of the words used to describe one of the most impressive women in Southwest history and American History.

Born in 1840 Lozen, a Chihenne Chiricahua Apache, grew up in the Warm Springs area, or Ojo Caliente, New Mexico. Sister to the Apache chief Victorio, Lozen (although 15 years his junior) became his “right hand” and his most trusted advisor. For decades she counseled her brother and other Apache chiefs, including Nana and Geronimo, in matters of war, religion, and the livelihood of their people.

Lozen (an Apache nickname meaning expert horse thief—her birth name isn’t known ) grew up during one of the bloodiest eras of American History. Strife between her native people, the Mexican people, and the U.S. Government remained constant in her life, and although she and her people always strove to keep their lands and live in peace, they never achieved either.

It became obvious early in Lozen’s childhood that she had special gifts and talents including supernatural powers. Though she might have earned her nickname as a young woman, as a child, Lozen felt a great connection with horses and was an expert at taming, training, and riding them. She had no interest in marriage nor the domestic duties of the other girls and women of her tribe. With her superior athletic skill and prowess, Lozen preferred learning about martial arts and the ways of battle, which her brother was eager to teach her. In addition, she showed an aptitude for healing and medicine and often cared for the sick and injured of the tribe. She also became an expert midwife.

Her spiritual sensibilities were also more heightened than many of her tribe. At about the age of 12, after receiving the rites of puberty, Lozen climbed to the top of a mountain and became blessed with supernatural powers. This power gave her the ability to determine when and from where enemies of her tribe approached. Historical sources claim she would stand with her arms outstretched, singing a prayer song to Ussen, the Apache god of life or creation, and turn slowly in a circle. If her fingers tingled, or her palms turned a different color, she knew the enemy was near. Depending on the intensity of the sensations, she could calculate the distance. This made her invaluable to Victorio, and she often sat at his side in council meetings and participated in war ceremonies. Victorio said about his little sister, she is “strong as a man, braver than most, and cunning in strategy. Lozen is a shield to her people.”

Victorio and Lozen fought many battles with the neighboring Mexicans, the U.S. Government, and the white settlers who had come to their lands. In 1869, Apache leaders, including Victorio and Lozen, met with the U.S. Government to secure peace and receive a promised land grant, or reservation, near Ojo Caliente. However, in time, the Chihenne were moved to the Mescalero Reservation near Tularosa and were later relocated to the San Carlos Reservation in Arizona. The conditions at San Carlos, referred to as “Hell’s Forty Acres,” were harsh, and many Apache’s perished due to inadequate food, water, and healthcare.