Referred to as “The People’s Princess,” “The Tragic Princess,” “The Peacock Princess,” and “The Island Rose,” Princess Ka’iulani is one of Hawaii’s most beloved royal Princesses. Born in 1875,  this amazing young woman  lived her life with heart, passion, and a sense of duty to her native land. Unfortunately, her destiny to rule would be cut short  by the abrupt end of her family’s legacy, and the end of an age. Here are some fascinating facts about this young Hawaiian heroine.

#1)  She was the first ‘hapa haole’ (half western/white) heir to the Hawaiian throne. 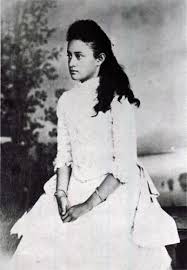 Born to Princess Miriam Likelike, sister of King Kalakaua and Queen Lili’uokalani, and the Scottish financier, Archibald Scott Cleghorn, Victoria Ka’iulani’s birth was a gift to the Islands. Kaʻiulani was named after her maternal aunt Anna Ka’iulani, and Queen Victoria of England who helped restore the independence of the Kingdom of Hawaii during King Kamehameha III’s reign.

She was christened Princess Victoria Ka‘iulani Kawekio I Lunalilo Kalaninuiahilapalapa Cleghorn at St. Andrews Catherdral in Honolulu with the King and Her Highness Ke’elikolani standing in as godparents. After the christening, the King hosted an elaborate celebration at the Iolani Palace in Honolulu. Upon her birth, Kaʻiulani was gifted the estate of ‘Ainahau in Waikiki where she grew up with her parents and three half-sisters from her father’s first marriage.

#2)  She was an accomplished athlete, musician and artist.

Growing up in the paradise of ‘Ainahau (which means ‘cool land’), the Princess spent much of her time outdoors. She loved to ride her pony, Fairy, and also excelled in swimming, surfing, and dancing the hula. She and her half-sister Annie would often play the ukulele and sing for visiting dignitaries and honored guests. Influenced by her mother’s lady-in-waiting, art enthusiast and painter Isobel Strong, and the landscape artist Joseph Dwight Strong, the Princess developed an interest in painting. While pursuing her education in Europe, she took several trips to Scotland and France to study. While in school she also enjoyed many hours of tennis and cricket. 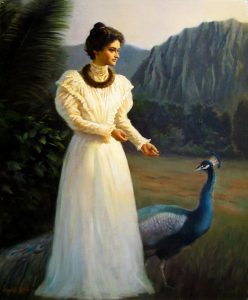 The birds, native to India, were highly prized in Victorian England. Ka’iulani’s godmother, Princess Ruth Ke`elikolani, gifted the young princess with a small flock of the birds called pikake in Hawaiian. They soon became favored pets of Ka’iulani and her fondness of them was so great, she was sometimes referred to as The Peacock Princess. She also adored the white blooms and fragrance of Arabian jasmine, also native to India, and the flowers also became known as pikake. Today, a small park that was once part of her family’s estate is graced with a statue of Ka’iulani feeding her beloved peacocks.

#4)  She received a British education.

As future Queen to the Hawaiian throne, an well-rounded education was extremely import for the Princess. After discussions among the King, the cabinet minister Mr. Lorin Thurston, and her father, it was decided that thirteen-year-old Victoria would to pursue a private education at Great Harrowden Hall in Northhamptonshire.

Prior to her departure, Honolulu was honored with a visit from the famed author Robert Louis Stevenson. The royal family welcomed him with open arms and he became close with the King and Ka’iulani’s father. To help ease the anxiety of leaving her home for the first time, Stevenson told the Princess tales of her father’s homeland, and of great Celtic Warrior Queens. He also gifted her with a poem that he wrote in her autograph book.

Forth from her land to mine she goes,

The island maid, the island rose,

Light of heart and bright of face:

The daughter of a double race.

Her islands here in southern sun

Shall mourn their Ka’iulani gone,

And I, in her dear banyan shade,

Look vainly for my little maid.

But our Scots islands far away

Shall glitter with unwanted day,

And cast for once their tempest by

To smile in Ka’iulani’s eye.

Ka’iulani and her older half-sister Annie, with whom she was closest, traveled to England to pursue their education for one year. However, for the princess, one year became four. She excelled in her studies of Latin, Literature, Mathematics and History. She took courses in French, German, and English, and art.

#5)  She was an impassioned advocate against the annexation of Hawaii. 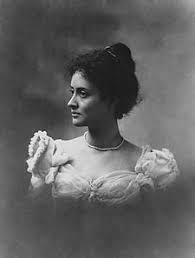 During Ka’iulani’s years abroad, there was much unrest in Hawaii. Her uncle, King Kalakaua, died in 1891, and her aunt, Princess Lili’uokalani, became queen. The new queen appointed Ka’iulani as her heir, making her Crown Princess of Hawaii. In 1893, the Hawaiian monarchy was overthrown and her aunt was deposed. The movement to annex Hawaii to the United States was in part lead by Lorrin Thurston, the very man who took part in the decision to prepare Ka’iulani for her future life as queen.

In an attempt to fight the overthrow of her kingdom, Ka’iulani traveled to Washington to plead “for my throne, my nation, and my flag.” Upon her arrival she made a statement to the press:

“Seventy years ago, Christian America sent over Christian men and women to give religion and civilization to Hawaii. Today, three of the sons of those missionaries are at your capitol asking you to undo their father’s work. Who sent them? Who gave them the authority to break the Constitution which they swore they would uphold? Today, I, a poor weak girl with not one of my people with me and all these ‘Hawaiian’ statesmen against me, have strength to stand up for the rights of my people. Even now I can hear their wail in my heart and it gives me strength and courage and I am strong – strong in the faith of God, strong in the knowledge that I am right, strong in the strength of seventy million people who in this free land will hear my cry and will refuse to let their flag cover dishonor to mine!”

She also met with President Grover Cleveland to plead her case. Impressed with the seventeen year old Princess, President Cleveland agreed to reassess the situation in Hawaii. However, in the end, the annexation took place, much to the devastation of the Princess.

After the overthrow of the Hawaiian royal family, Princess Ka’iulani’s health began to deteriorate. A family friend stated that the weakness of her heart was due to shock, the direct consequence of her promised kingdom being wrenched away from her. On a happier note, she became engaged to the Hawaiian Prince David Kawananakoa, and the couple made plans for a joyous celebration.

Despite her weakness, the princess continued to partake of swimming, surfing, and other outdoor activities. But, when she was caught in a thunderstorm while riding horseback in Waimea while visiting the Island of Hawaii, she became ill and never recovered. She died on March 6, 1899 of “inflammatory rheumatism” to the heart-break of her fiancé, her family, and the Hawaiian people.

A dramatized movie of her life was released in 2009. The film’s original title, “The Barbarian Princess,” was very controversial, and hearkened back to the pro-annexation press referring to her as a half-breed, or “dusky” or “heathen.” The title was changed several times and was finally released as “Princess Kaiulani.”