She had four different names.

She was way ahead of her time—in more ways than you think.

Evans started her singing career at seven years of age singing gospel solos at church. Bright and more advanced than her classmates, she skipped several grades. She fell in love with Thomas Frederick Fox and married him at 14 years of age. The couple had a child, Thomas Fox, Jr. when she was 15, and she divorced Fox when she was 16.

She raised her son as her “younger brother.”

Back in the day, it wouldn’t do for a woman’s career, especially one is show business to be a mother, much less a young mother. In 1945, after her marriage to R. Dale Butts, Evans acknowledged Thomas as her son.

She appeared in a movie with John Wayne, Old Oklahoma.

Evans got her start in radio as a young woman. Her voice and movie star looks led to Hollywood where she signed a contract with 20thCentury pictures. Evans then went on to sign with Republic pictures where she appeared in more movies including The Cowboy and The Senorita. Dale met her fourth and final husband Roy Rogers on the set of that movie.

She never liked being typecast in Westerns.

Evans wanted to appear in musicals. She somewhat got her wish; she appeared in a multitude of musical Westerns.

She didn’t learn to ride until she was 30 years of age.

People assumed because she was from Texas, she knew how to handle and ride horses. She did not until she met Rogers and he taught her to ride on the set of their first movie together. Later in their television show, her favorite side-kick, besides Roy, was her faithful horse–a buckskin quarterhorse named Buttermilk.

She was passionate about children and children’s causes. 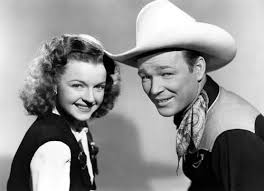 Dale and Roy had one child together, Robin Elizabeth, who died from Downs Syndrome before the age of two. Besides her son Thomas, Evans and Roy had four more children but adopted them. She and Roy spent endless hours and much of their fortune in devotion to children, especially those “at risk.” They also developed the Happy Trails Children’s Foundation.

She experienced extreme joy and extreme heartache regarding her children.

A devoted Christian and loving person, Evans opened her heart and her home to four adopted children. Having lost her first child to Downs Syndrome, the heartache continued when Debbie, her adopted Korean daughter died at age 12 in a bus accident, and her adopted son, Sandy, died while serving in the army in Germany.

She was incredibly creative and prolific.

This post was first published on Kari Bovee’s Equus Plus blog on April 5, 2018