Girl With A Gun

She’s on the rise to fame and fortune, but her sudden notoriety comes with some deadly consequences.
Annie Oakley thrives as a sharpshooter in the Wild West Show. Finally, she has a chance to save her family’s farm—and make her dreams come true. But her act misfires when she discovers her Indian assistant dead in her tent.

Uncovering a shocking secret from her assistant’s past, the girl with the gun believes it’s murder. Determined to find the truth, she ruffles some horse feathers, making enemies along the trail. But, when her prized gelding is stolen, Annie realizes she might have been the target all along.

Can Little Miss Sure Shot save her equine friend and find the killer before everything she’s worked for is destroyed?

Girl with a Gun is the first book in Annie Oakley young adult mystery series. If you like a cunning mystery, a feisty heroine, and a fast-paced plot that keeps the pages turning, you’ll love this wild ride with the iconic Annie Oakley in the saddle. 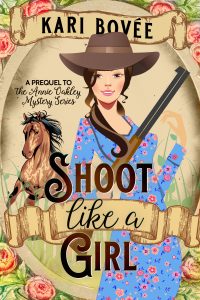 Prequel Novella to Girl with a Gun

After the death of her father, it is up to 12-year old Annie Oakley to help support her mother and two younger siblings. Annie thinks she can do this at home, but her mother has other ideas. She sends Annie to the Darke County Infirmary, the local poorhouse, in the hopes that Annie can be trained to work for a loving family to help support her own. After learning the necessary skills, Annie is farmed out to the McCrimmons, a couple in a distant county, to help keep house and take care of their young infant.

Ready to do her part, Annie tries her best to put on a brave face, but as soon as she sets out from the infirmary with Mr. McCrimmon, she quickly learns that life away from home is far worse than she ever expected. Suffering neglect and abuse at the hands of the McCrimmons, whom Annie refers to as the wolves, she perseveres in the hopes of helping her family. Her friendship with Buck, a beautiful buckskin horse, is the only bright spot in Annie’s life.

After a harrowing night at the hands of Mrs. McCrimmon, and no word from her family or the infirmary, Annie resigns herself to a miserable life with the wolves. Either that, or she must take matters into her own hands, and escape. Annie formulates a plan, but when she witnesses Mr. McCrimmon beating Buck nearly to death, Annie decides to take action—no matter what the cost.

In Shoot Like a Girl, Annie Oakley experiences some of life’s most disheartening hardships only to emerge as an empowered young woman who goes on to become an amateur sleuth and America’s most cherished heroine.

Peccadillo at the Palace

In the 2nd book in the Annie Oakley Historical Mystery Series, Peccadillo at the Palace, Annie Oakley comes into her own as an amateur sleuth.

With a new lease on life and a new manager, her dashing Irish husband, Frank Butler, Annie Oakley and her beloved Buck the Wonder Horse rejoin the ever-popular Buffalo Bill’s Wild West Show. Already renown for her performances with Buck in the United States, Annie receives a surprise invitation from Queen Victoria of England to attend her Golden Jubilee celebration.

During their long journey across the Atlantic, Annie’s escort, an attendant of the Queen, is murdered, and the killer leaves a cryptic note stating that Queen Victoria is next. Annie attempts to find the murderer and believes she is successful. But when they arrive in England and perform for Victoria, an assassination attempt is made on the Queen, and Annie realizes she’s condemned an innocent person. Fingers point to a disgruntled royal servant, but when an attempt is made on Frank’s life a week later, rumors abound about a militant Irish Gang in London.

With the help of socialite Lilly Langtry, the legendary Chief Yellow Shirt, and famous poet Oscar Wilde, Annie sets out to find the murderer who tried to take down her husband, and England’s longest reigning monarch.

Folly at the Fair

She never misses a target. But unless she can solve this murder, she’ll become one…
Chicago World’s Fair, 1893. “Little Sure Shot” Annie Oakley is exhausted from her work with Buffalo Bill’s Wild West Show. But when a fellow performer scuffles with a man who threatens her harm, she has to keep her eyes peeled. And when the heckler is found dead under the Ferris Wheel, Annie won’t rest until she proves her defender is innocent.

Before she can rustle up any clues, an old friend asks Annie to protect her young daughter. And as more bodies turn up around the grounds, she’s going to need all her sharpshooting skills just to stay alive.

Can Annie live up to her reputation and put a bullseye on the killer?

Folly at the Fair is the third book in the Annie Oakley mystery series. If you like strong heroines, Wild West adventures, and suspenseful twists and turns, then you’ll love Kari Bovée’s fast-paced whodunit.

A ghost from her past. Her sister murdered. Is a Broadway star facing her final curtain call?
New York City, 1920. Grace Michelle has everything she wants: a home, a family, and a future career as a costume designer for the famed Ziegfeld Follies. Pretty good for a girl who once lived on the streets of New York City. But when her sister, the star of the show, is murdered, Grace’s sheltered life is shattered.

The young designer is forced to give up her dreams and replace her dead sister as the Follies’ star. It means risking her life for publicity stunts. That puts her in the path of a dangerous man from her troubled past—a man she thought she’d left for dead

Grace in the Wings is the gripping first book in the Grace Michelle Mystery series. If you like historical mysteries dripping with 1920s swagger, unfettered ambition, and plenty of murderous twists, you’ll love Kari Bovee’s riveting tale.

A Grace Michelle Mystery- Book #3
A priceless heirloom worth its weight in lives. Can she crack the case before she becomes a killer’s trophy?

Grace In The City 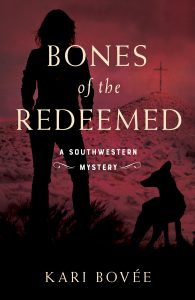 Bones of the Redeemed

New Mexico, 1952. Archaeology grad student Ruby Delgado is plagued by guilt after losing her son. So when her latest excavation drops her down a sinkhole filled with suspiciously mutilated bodies, she’s driven to bring the murderer to justice. But when digging deeper brings her dangerously close to a sinister religious sect, she could be their next sacrifice…

Discovering some of the victims were crucified, Ruby pushes hard to give the evidence to the authorities. But when her trail crosses the path of a beaten man left for dead in the desert, she realizes she may be the only person who can save the community.

Can Ruby stop the sacrifices and slay her inner demons, or will hers be the next body laid to rest?

Bones of the Redeemed is a hair-raising standalone Southwestern mystery. If you like complex heroines, cult conflict, and hard-won redemption, then you’ll love Kari Bovee’s grisly tale.