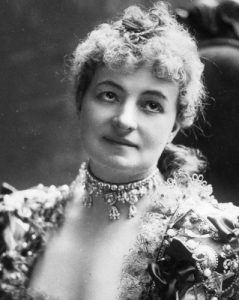 world. Great Britain was represented with a model of its latest warship, the Victoria. Japan hosted an outdoor exhibit of its unique Buddhist temple, and Egypt’s “Streets of Cairo” featured beautiful belly dancers. Fairgoers could walk through a Moorish palace, a German Village, and pavilions from Canada, Norway and Russia to name just a fe

One of the most interesting aspects of the fair was the celebration of women, thanks largely to the efforts of Bertha Honoré Palmer and the Board of Lady Managers. These women were dedicated to making the woman’s voice, and the woman’s cause, heard. Female artists, dancers, actresses, and suffragettes, were invited to show their talents, or speak their truths to the hordes of visitors who attended the fair. One such honored guest was the Polish Shakespearean actress, Helena Modjeska.

Born in Kraków, Poland in 1840, many of the aspects of Helena’s parentage and early life are ambiguous. Also uncertain in Helena’s history were the details concerning her first marriage, to her former guardian, actor and director, Gustave Sinnmayer—even to Helena. Years later, she discovered the marriage was null and void as he was still married to his first wife.

In 1861 Helena made her stage debut and for twelve years she graced the stage of theaters in Krakow and Warsaw, establishing herself as a consummate Shakespearean star. During that time, she left Gustav and in 1868 she married a Polish nobleman, Karol Bozenta 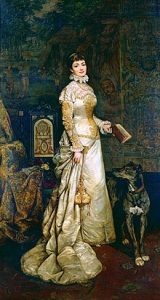 Chlapowski who was employed as the editor of a liberal nationalist newspaper. Helena later wrote that their home became the center of the artistic and literary world of Kraków. Poets, authors, artists, actors and politicians clamored to frequent the couple’s salon.

In 1876, Helena and her husband emigrated to America to, in her words, “settle down somewhere in the land of freedom, away from the daily vexations to which each Pole was exposed in Russian or Prussian Poland.”

Despite the fact she could barely speak English, Helena was discovered by theatrical agent Harry J. Sargent who signed her for a tour on the east coast where she made her New York debut. She then spent three years abroad, mainly in London, attempting to improve her English, before returning to the stage in America where she achieved great success as a Shakespearean actress.

In 1893 Helena was invited by the Board of Lady Managers to speak to a women’s conference at the World’s Columbian Exposition in Chicago. Her topic was the plight of women under Russian and Prussian ruled Poland. The talk resulted in a Tsarist ban on her traveling in Russian territory.

My novel, Folly at the Fair, the third installment in the Annie Oakley Mystery series, takes place at the Columbian Exposition of 1893, where Annie Oakley herself was one of the empowered women celebrated at the Fair. In celebration of the book’s recent release I am giving away three signed copies. To enter simply go to http://karibovee.com/raffle/