Sophia Hayden is best known for designing The Woman’s Building at the Columbian Exposition in 1893. She was only twenty-one years old.

Born in Santiago, Chili, Sophia would leave there at a very young age, on her own, to attend school. At six years old, Sophia’s parents, Elezena Fernandez, a Santiago native, and George Henry Hayden, an American dentist from Boston, sent their daughter to Jamaica Plain, a suburb of Boston to live with her grandparents and attend the Hillside School. 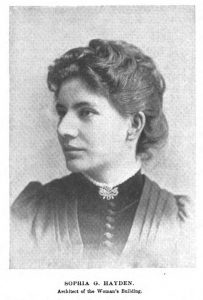 bright and dedicated student, she was then accepted to MIT in Cambridge, Massachusetts where she obtained a degree in architecture and graduated with honors. But unfortunately, that wasn’t enough to get her hired as an architect, most likely because she was a woman. After graduation, she took a job at Boston High School as a mechanical drawing teacher.

Fast forward to 1891. Businesswoman, philanthropist, and socialite Bertha Honoré Palmer and her Board of Lady Managers, a group of women dedicated to representing women at the Columbian Exposition of 1893, needed someone to design The Woman’s Building to do just that. They ran a design competition for female architects. Thirteen women entered the competition by submitting their designs. Hayden based her design on her college thesis project, a striking classic Renaissance structure with pavilions at the center and both ends, multiple arches and columned terraces. She won first prize and the chance to go down in history as the only female architect involved in the building of what would become known as the White City.

However, the Board of Lady Managers and Sophia didn’t see eye to eye on much of

anything after the contest, particularly concerning philosophies of obtaining furnishings and art for the interior. Sophia also faced frustration with the continual changes demanded by Bertha Palmer and her construction committee. Other architects sympathized with and defended Sophia’s ideals, but in the end, Bertha Palmer fired her.

Sophia’s frustration and dismay at being removed from the project was somewhat soothed with an award for the building’s “delicacy of style, artistic taste, and geniality and elegance of the interior.”

The following year, Hayden designed a memorial for women’s clubs in the U.S. but the memorial was never built. Hayden never worked as an architect again. Sadly, all of the buildings in the White City were destroyed two years after the Fair.

Since all of my books in the Annie Oakley Mystery series feature strong, talented and empowered women, I had to highlight the Woman’s Building in my latest release Folly at the Fair, which takes place during the Columbian Exposition of 1893. In celebration of the release I am giving away three signed copies of the book to my Alexa listeners. All you have to do to enter is go to http://karibovee.com/raffle/ I hope you are a winner! Good luck!