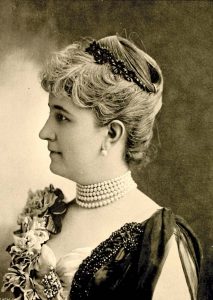 Potter Palmer, a merchant who’d made his fortune catering to the tastes and needs of women through his popular mercantile. Palmer made even more money when he sold his store to a retail syndicate that would eventually become Marshall Fields.

With his riches, Palmer invested in real estate. He also built a luxury hotel which he named The Palmer House. Unfortunately, the hotel and many of their other assets fell victim to the Great Chicago Fire of 1871. Luckily, with the help of Bertha, Palmer was able to re-establish his fortune and rebuild his hotel, which would soon become the toast of the town and a Chicago landmark.

Meanwhile, Bertha was on the rise to the top of Chicago’s social elite. She became one of the earliest members of the Chicago Woman’s Club, a group of women dedicated to creating solutions to their cities’ social and economic concerns. The group in Chicago campaigned for impoverished children and also for the children of women incarcerated in prison. In addition, they developed and supported early childcare in the form of preschools and kindergartens, and petitioned for them to become part of the Chicago school system.

In 1891,Chicago was preparing for the World’s Columbian Exposition to take place in the city in 1893. Women played a large role in the planning of the fair, led by Bertha Palmer, the new President of the Board of Lady Managers. Collectively, they set out to celebrate women from around the world, and did so first by hiring female architect Sophia Hayden to design and build what would become known as the Woman’s Building.

The Woman’s Building contained exhibits of works by women across a variety of fields from fine art, applied art, literature and music, to science and home economics. There were also exhibits about women in American History and other cultures and places in the world.

Annexed to the Woman’s Building was the Children’s Building which exhibited American 19th century best practices for child-rearing and education.

In addition to her social causes, Bertha had passion for art, primarily French Impressionist art. She and her husband amassed quite a collection including almost thirty Monet’s and a dozen Renoirs. These works now form the core of the Art Institute of Chicago’s Impressionist collection.

Later in life, after the death of her husband, Bertha purchased over 80,000 acres of land in Florida. An astute business woman, she became a progressive rancher and farm developer. She introduced many innovations to foster Florida’s ranching, citrus, dairy, and farming industries. Within sixteen years after her husband’s death, she managed to double the value of the estate he had left her.

Bertha Palmer was such a prominent figure in the history of the Columbian Exposition of 1893, I just had to make mention of her in my latest release, Folly at the Fair. In fact, in the book she invites Annie Oakley, Buffalo Bill, and other members of the Wild West Show to a party at the lovely Palmer House hotel where Annie’s sidekick, investigative journalist Emma Wilson has taken up residence.

In honor of the release of Folly at the Fair, I will be giving away three signed copies of the book. All you have to do to enter is go to http://karibovee.com/raffle/ Good luck!