New York City… “The city seen from the Queensboro Bridge is always the city seen for the first time, in its first wild promise of all the mystery and the beauty in the world.”
― F. Scott Fitzgerald, The Great Gatsby

The Big Apple, The City of Dreams, Empire City, The City That Never Sleeps –  it’s obvious why it makes for an interesting setting in a novel. Especially because of its history; its grandeur and diversity.

Here are a few of my favorite historical fiction novels set in The City So Nice, They Named it Twice:

By day, Mary Ballard is dutiful lady’s maid to Charlotte Walden, a wealthy and accomplished belle of New York City high society. But Charlotte would never trust Mary again if she knew the truth about her devoted servant’s past.

On her nights off, Mary sheds her persona as prim and proper lady’s maid to reveal her true self—Irish exile Maire O’Farren. She finds release from her frustration in New York’s gritty underworld—in the arms of a prostitute and as drinking companion to a decidedly motley crew consisting of members of a dangerous secret society.

Meanwhile, Charlotte has a secret of her own—she’s having an affair with a stable groom, unaware that her lover is actually Mary’s own brother. When the truth of both women’s double lives begins to unravel, Mary is left to face the consequences. Forced to choose between loyalty to her brother and loyalty to Charlotte, between society’s respect and true freedom, Mary finally learns that her fate lies in her hands alone.

Anna Kerrigan, nearly twelve years old, accompanies her father to visit Dexter Styles, a man who, she gleans, is crucial to the survival of her father and her family. She is mesmerized by the sea beyond the house and by some charged mystery between the two men.

‎Years later, her father has disappeared and the country is at war. Anna works at the Brooklyn Naval Yard, where women are allowed to hold jobs that once belonged to men, now soldiers abroad. She becomes the first female diver, the most dangerous and exclusive of occupations, repairing the ships that will help America win the war. One evening at a nightclub, she meets Dexter Styles again, and begins to understand the complexity of her father’s life, the reasons he might have vanished.

New York City, 1920. Grace Michelle has everything she wants: a home, a family, and a future career as a costume designer for famed showman Florenz Ziegfeld, Jr.’s Ziegfeld Follies. Pretty good for a girl who once lived on the streets of New York City. But when her sister, Sophia, the star of the show, is murdered, Grace’s safe and protected life is shattered.

Battle-scarred by the war and emotionally scarred by his past, Chet Riker has made it a practice to keep his distance from others; love, after all, leads only to pain. But Chet has a problem—a big one: he’s become indebted to mob-boss Joe Marciano in an attempt to save his estranged mother’s life, and Marciano wants him to pay up or else. Desperate to get the money, he contacts former client Florenz Ziegfeld for work.

Soon, Chet finds himself playing bodyguard for introverted Grace, who has reluctantly agreed to be Ziegfeld’s new leading lady—on the condition that Ziegfeld promises to find Sophia’s killer. Upon meeting Grace, Chet quickly finds his hardened theory that love equals pain tested. Grace, meanwhile, is swept up in a life she never wanted as the Follies’ star, and as the pawn in a series of publicity stunts during a transcontinental train trip to California that puts her life at risk. Who would want her and Sophia dead? Together, she and Chet must confront publicity-hungry Florenz Ziegfeld, power-driven Joe Marciano, and their own pasts to find Sophia’s killer—and let themselves love once again.

Alva Smith, her southern family destitute after the Civil War, married into one of America’s great Gilded Age dynasties: the newly wealthy but socially shunned Vanderbilts. Ignored by New York’s old-money circles and determined to win respect, she designed and built nine mansions, hosted grand balls, and arranged for her daughter to marry a duke. But Alva also defied convention for women of her time, asserting power within her marriage and becoming a leader in the women’s suffrage movement.

With a nod to Jane Austen and Edith Wharton, in A Well-Behaved Woman Therese Anne Fowler paints a glittering world of enormous wealth contrasted against desperate poverty, of social ambition and social scorn, of friendship and betrayal, and an unforgettable story of a remarkable woman. Meet Alva Smith Vanderbilt Belmont, living proof that history is made by those who know the rules―and how to break them.

The year is 1911 when twenty-year-old heiress Peggy Batternberg is invited to spend the summer in New York City.

The invitation to Coney Island is unwelcome. Despite hailing from one of America’s richest families, Peggy would much rather spend the summer working at the Moonrise Bookstore than keeping up appearances with New York City socialites and her snobbish, controlling family.

But soon it transpires that the hedonism of Coney Island affords Peggy the freedom she has been yearning for, and it’s not long before she finds herself in love with a troubled pier-side artist of humble means, whom the Batternberg patriarchs would surely disapprove of.

Disapprove they may, but hidden behind their pomposity lurks a web of deceit, betrayal, and deadly secrets. And as bodies begin to mount up amidst the sweltering clamor of Coney Island, it seems the powerful Batternbergs can get away with anything… even murder.

Extravagant, intoxicating, and thumping with suspense, bestselling Nancy Bilyeau’s magnificent Dreamland is a story of corruption, class, and dangerous obsession.

From Graham Moore, the Oscar-winning screenwriter of The Imitation Game and New York Times bestselling author of The Sherlockian, comes a thrilling novel—based on actual events—about the nature of genius, the cost of ambition, and the battle to electrify America.

New York City, 1888. Gas lamps still flicker in the city streets, but the miracle of electric light is in its infancy. The person who controls the means to turn night into day will make history—and a vast fortune. A young untested lawyer named Paul Cravath, fresh out of Columbia Law School, takes a case that seems impossible to win. Paul’s client, George Westinghouse, has been sued by Thomas Edison over a billion-dollar question: Who invented the light bulb and holds the right to power the country?

In obsessive pursuit of victory, Paul crosses paths with Nikola Tesla, an eccentric, brilliant inventor who may hold the key to defeating Edison, and with Agnes Huntington, a beautiful opera singer who proves to be a flawless performer on stage and off. As Paul takes greater and greater risks, he’ll find that everyone in his path is playing their own game, and no one is quite who they seem.

A Fall of Marigolds by Susan Meissner

September 1911. On Ellis Island in New York Harbor, nurse Clara Wood cannot face returning to New York City, where the man she loved fell to his death in the Triangle Shirtwaist Fire. Then, while caring for a fevered immigrant whose own loss mirrors hers, she becomes intrigued by a name embroidered onto the scarf he carries…and finds herself caught in a dilemma that compels her to confront the truth about the assumptions she’s made. What she learns could devastate her—or free her.

September 2011. On Manhattan’s Upper West Side, widow Taryn Michaels has convinced herself that she is living fully, working in a charming specialty fabric store and raising her daughter alone. Then a long-lost photograph appears in a national magazine, and she is forced to relive the terrible day her husband died in the collapse of the World Trade Towers…the same day a stranger reached out and saved her. But a chance reconnection and a century-old scarf may open Taryn’s eyes to the larger forces at work in her life.

The Golem and the Jinni by Helene

In The Golem and the Jinni, a chance meeting between mythical beings takes readers on a dazzling journey through cultures in turn-of-the-century New York.

Chava is a golem, a creature made of clay, brought to life to by a disgraced rabbi who dabbles in dark Kabbalistic magic and dies at sea on the voyage from Poland. Chava is unmoored and adrift as the ship arrives in New York harbor in 1899.

Ahmad is a jinni, a being of fire born in the ancient Syrian desert, trapped in an old copper flask, and released in New York City, though still not entirely free

Ahmad and Chava become unlikely friends and soul mates with a mystical connection. Marvelous and compulsively readable, Helene Wecker’s debut novel The Golem and the Jinni weaves strands of Yiddish and Middle Eastern literature, historical fiction and magical fable, into a wondrously inventive and unforgettable tale.

I am Sophie Tucker by Susan Lloyd Ecker

From 1906 through the beginning of television, Sophie Tucker and her bawdy, brash, and risqué songs paved the way for performers such as West, Monroe, Midler, Cher, Madonna, and Gaga.

“Sophie was like the Forrest Gump of the first half of the 1900s,” says co-author Susan Ecker. “She was close friends with seven presidents, King George VI, young Queen Elizabeth, Chaplin, J. Edgar, Capone, Garland, Jerry Lewis, Sinatra and every other notable of her era.”

Tucker tried to get her story published for nine years, without success. Undaunted, Sophie hired half a dozen ghostwriters, but she still had no takers for her no holds barred autobiography. Eventually, Doubleday published a sanitized version in 1945.

“After immersing ourselves in Sophie’s papers and surviving friends,” says co-author Lloyd Ecker, “this initial volume is what should have been the actual autobiography of Tucker.”

Though she obsessively documented her life, Sophie loved to exaggerate for dramatic effect. Over the years, she told multiple versions of each important event. At the end, not even Sophie knew the difference between truth and tall tale.

I Am Sophie Tucker puts back all of the delicious bits nixed by Doubleday’s lawyers and throws in other Tucker show business dirt, intrigue, arrests, romance, murder, gangsters, and scandals. Now you can read it for yourself.

So there it is! My top favorite historical fiction pieces set in New York City! What would you add to the list? Let me know in the comments below! 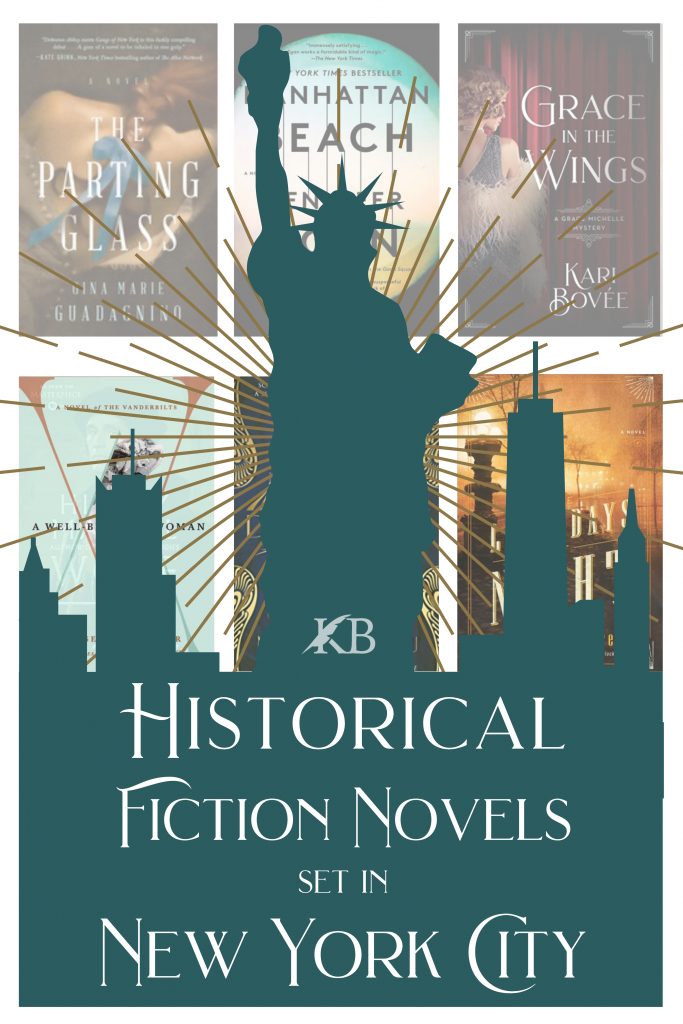