It is not common in history for a slave to become an empowered ruler, much less a female slave. But, that is what happened with Roxelena, who became one of the most powerful and influential women in Ottoman history. What is common is when a person does rise to power in any empire or kingdom, it is often fraught with controversy. This, too, holds true for Roxelena, as she influenced and changed the fate of women of the Ottoman empire’s harems and beyond. 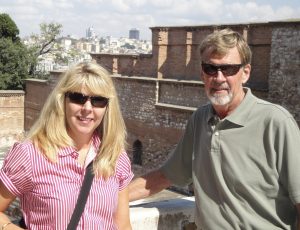 In 2009, my father and I took a tour of some of the cities surrounding the Black Sea. In Istanbul, we visited Suleiman’s palace and took a tour of the rooms of his royal harem. It was then I first learned of Roxelena, an unlikely empowered woman—a slave girl–who came to incredible power in a land and at a time where women had no power at all.

Roxelena’s birth name is unknown, but some historians claim her birth name to be Aleksandra Lisovska, and she might have been born to an Orthodox priest and his wife, in 1502-1505. Her family lived in the town of Rohatyn, part the Polish Kingdom, now known as western Ukraine.

In the early 1520’s, Crimean Tatars raided young Aleksandra’s town and kidnapped her, as they often did with Christian girls. They took her to Istanbul to sell her into the slave trade. Hasfa Sultan, wife of Salim I, and mother of Suleiman the Magnificent purchased Aleksandra for her son’s growing harem. Aleksandra had to forsake her Christian religion and to convert to Islam. She was educated in the Arabic, Persian, and Turkish languages, and schooled in the art of lovemaking.

Historians agree Aleksandra was about fifteen years of age when she became Suleiman’s concubine, around the time he came into power as Sultan. Aleksandra then became known as Hurrem, or “cheerful one” for her sunny disposition and cheerful nature. The name Roxelena came later from the Europeans, in reference to her Ruthenian roots.

As one of Suleiman’s two hundred concubines, it might have taken a girl a long time to get noticed by the Sultan, but not Roxelena. She quickly became his favorite, and a life-long love affair began—much to the disappointment and resentment of the other concubines, particularly Mahidevran, the previous favorite. A rivalry developed between the two women.

Ottoman Imperial custom dictated that when a concubine gave birth to a son, she was elevated in status, but removed from the Sultan’s bed. This prevented undue influence over the Sultan and also prevented future feuds between the concubines’ sons for the crown. But when Roxelena gave birth to her son, Mehmed, Sulieman kept her close to him, in direct defiance of Imperial custom. As his most favored concubine, not only did Roxelena remain in Sulieman’s bedroom, but she bore him four or five other children.

Suleiman’s subjects did not know what to make of this affront to a hundreds-year-old tradition, so they surmised it must be witchcraft on Roxelena’s part. Suleiman further mystified his subjects when he married Roxelena—something else a Sultan rarely did. Any son a sultan bore became an heir, so marriage was unnecessary, especially marriage to a slave. In marrying Roxelena, it meant she became a free woman.

Roxelena and Suleiman had a marriage based on love and mutual respect. When separated by travel and the responsibilities of the Sultanate, they wrote many love letters and poems to one another. Suleiman also consulted with Roxelena on matters of state. She corresponded with the King of Poland and other important world leaders on the Sultan’s behalf. Having access to the Sultan’s riches, she used the money to build mosques, schools, baths, and a hospital.

Despite a happy marriage and the privilege of power, Roxelena also experienced her share of controversy. Not only did the Sultan’s subjects believe Roxelena had bewitched him, they also believed she was instrumental in the assassination of several rivals to the throne. The most prominent being Mustafa, the son of the Sultan’s former favorite, Mahidevran. (To be continued next week.)